[I burst out laughing at the statement by the Jewish scum that Trump has sunk to the lowest level by stoking racial resentment and fear! Yes, Trump did it once … but the Jews have been doing nothing but this for the last century! Jan]

“CAPE TOWN, South Africa — President Trump waded into South Africa’s proposal to seize land from white farmers, saying in a post on Twitter late Wednesday that he had asked Secretary of State Mike Pompeo to “closely study” the “the large scale killing of farmers” — a claim disputed by official figures and the country’s biggest farmer’s group.

Mr. Trump’s comment that the “South African Government is now seizing land from white farmers” came after the Fox News host Tucker Carlson presented a late-night program on South Africa, including land seizures and homicides, and described President Cyril Ramaphosa as “a racist.”

The tweet gives prominence to a false narrative pushed by some right-wing groups in South Africa that there have been numerous seizures of white-owned land and widespread killings of white farmers. Some of those groups have brought their claims to the United States on lobbying trips. …”

It is a “false narrative” of brutal farm murders and anti-White land seizures. This has has been going on for at least 15 years now and has only recently climaxed:

In the two days since he was implicated as a co-conspirator in a federal crime, the president – with the help of his allies in the right-wing press – has fallen back on his most basic political strategy: stoking racial resentment and fear. http://bit.ly/2Mw0AGP

In the two days since he was implicated as a co-conspirator in a federal crime, the president – with the help of his allies in the right-wing press – has fallen back on his most basic political…

He has not only shamelessly exploited a horrible tragedy in Iowa but tweeted out his intention to put the full force of the U.S. State Department behind a white nationalist conspiracy theory.

I think people are right to demand answers to a number of questions about this tweet. 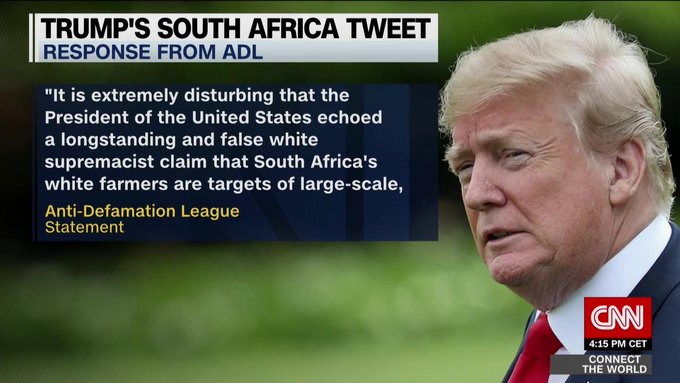 ADL statement: “We would hope that the President would try to understand the facts and realities of the situation in South Africa, rather than repeat disturbing, racially divisive talking points used most frequently by white supremacists.”

CNN, which fomented the race riots in Ferguson and Baltimore, is laughably accusing President Trump of stoking racial divisions to divide Americans: 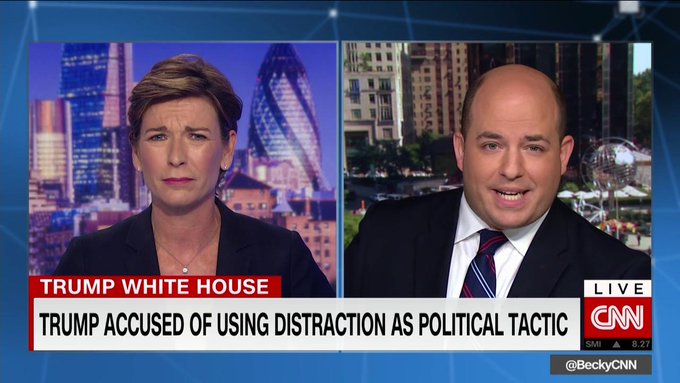 Julius Malema of “Kill the Boer, Kill the Farmer” fame has already weighed in on this. Julias Malema: We’re not scared of Trump. We are prepared for him. There’s no white genocide in South Africa. There’s black genocide in USA. Black people are being killed everyday there. #LandExpropriation #EFFMediaBriefing

Bill O’Reilly is already taking my advice and DR3’ing this:

Because President Trump objects to the government of South Africa seizing private land from white farmers, the far left is again branding him racist. Insane. South Africa is stealing from its citizens based on skin color. Racist?

WANTED BY JAN: Info on the Information Scandal of the 1970s

21st Aug 2022 jlamprecht Comments Off on WANTED BY JAN: Info on the Information Scandal of the 1970s

LESSONS FOR WHITES: Whites WELCOME TO THE DARKNESS! (yes, literally) from Rolling Blacked out South Africa!

19th Jan 2021 jlamprecht Comments Off on LESSONS FOR WHITES: Whites WELCOME TO THE DARKNESS! (yes, literally) from Rolling Blacked out South Africa!

11 YEARS OF US WAR IN AFRICA: VIOLENCE HAS SPIKED IN AFRICA SINCE THE MILITARY FOUNDED AFRICOM, PENTAGON STUDY FINDS – My Comments

From Jan: Lots of Power Outages: Putting up Battery powered light bulbs in my house!

You can be fired for sending WhatsApp messages in South Africa

Could the Russians be friends of White South Africans? Could we abandon America? Would we get weapons from Russia?

Do White South Africans have any friends anywhere?