Articles
12th Sep 2019
[This is not surprising. The K-word in South Africa can now get you into jail. A couple of whites, including a white woman have been thrown into jail over the use of this word. The K-word is now like the N-word in the USA, except, like I say, you can do jail time for it.

The regional manager who said it, is a woman, and I am guessing, most likely a white woman. White women, white faggots and others have been promoted massively in South Africa under black rule. And these white women and white faggots have served their black/liberal/Jewish masters well. So while I am sad to see them fire a white, I have been in the corporate world where I saw all these white women and white faggots, shafting their own people and being promoted for it. The blacks have anyway begun firing and driving out these white women, so I'm not unhappy about it. I saw how dozens, even hundreds, of white men were all kept at the bottom, white a few fat white women were promoted and put in charge of thousands. I lost all respect for those white women, many of them Afrikaans, and I would not even dignify them with a hello greeting when walking past them. I lost all respect for them. The white MALE was always singled out by all and sundry and shafted. So I am happy to see that the white women are being taken down bit by bit. The white women need to be siding with the white men. We should be in the same side and not different sides as it has been.

As for the blacks, they look for any excuse to strike.

I'm going to take this at face value that maybe some black overheard the white woman saying this. I'm assuming this did happen. It could easily be. Whites are getting ever more frustrated with the blacks.

I think this is good. We need to get all whites on the same side … and then we can face our enemies together. I did not like the Liberal arrangements whereby white women were promoted like crazy and everywhere you went, the ONLY white person among a gaggle of non-whites was a WHITE WOMAN. Almost never a white male. And if there was a white male at the highest levels, then most of the time he was actually a faggot. A normal, white, heterosexual male was non-existent.

I'm also happy to see business being harmed. I love it. I say: sink this liberal system. Sink it. Jan]

Shoprite supermarkets in Johannesburg south closed their doors on Wednesday as angry employees downed tools and called for the suspension of a regional manager who allegedly called workers “lazy k*****s”.

Workers shut down the Southgate and Ridgeway supermarkets and threatened to close down more stores which fall under the regional manager.

They said they had suffered enough abuse and vowed to protest until the manager was suspended.

The alleged k-word incident on Saturday caused outrage. “We have been quiet because she is a boss, we are scared of being fired because we need the jobs,” said an employee who spoke on condition of anonymity due to fear of victimisation.

Employees at a Shoprite supermarket in Southgate, Johannesburg south, want justice after allegedly being called “lazy k***s” by a regional manager.
NEWS
2 days ago

Protesters were joined by community members and leaders. One of them, Ntsizwa Mabota, urged Shoprite to act swiftly.

“Our fellow brothers cannot be still subjected to this barbaric treatment anymore. We will stand with them all the way. We demand that [the manager] is suspended with immediate effect or we will shut down all these supermarkets in Joburg,” said Mabota.

Shoprite Holdings said in a statement that it did not condone racism. An investigation is under way.

“The Shoprite Group strongly disapproves of racism in the workplace and will not allow any member of management or staff to behave inappropriately. An investigation into the incident at Shoprite Southgate and related complaints started immediately … and a disciplinary process is being followed,” Shoprite said.

Employees @Shoprite_SA located at Southgate, Joburg East, have taken to the streets to demand the removal of a manager who allegedly called workers “lazy k***s”. @TimesLIVE 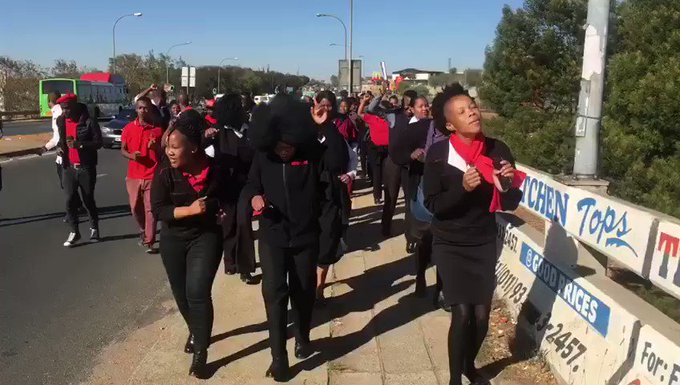 Shoprite said it was aware of its responsibility to provide a good working environment to staff, including contractors and merchandisers.

“Appropriate action will be taken in accordance with the law and the company’s code of conduct, which seeks to promote the principles of courtesy, respect and equality for all employees, including merchandisers and contracted workers and which applies to all management and staff,” added Shoprite.

Police confirmed that a group had been protesting but referred queries to Shoprite.

Attention: Important note from Jan… If you are waiting for me to contact you…

22nd Oct 2021 jlamprecht Comments Off on Attention: Important note from Jan… If you are waiting for me to contact you…

Video: South Africa: Things are about to get worse in SA by Economist Dawie Roodt

10th Oct 2022 jlamprecht Comments Off on Video: South Africa: Things are about to get worse in SA by Economist Dawie Roodt

IMPORTANT: 1997: Letter from the FBI to the South African Jewish Communist Ronnie Kasrils – re: US Espionage

13th Feb 2018 jlamprecht Comments Off on IMPORTANT: 1997: Letter from the FBI to the South African Jewish Communist Ronnie Kasrils – re: US Espionage

WHAT CAN I DO? – What can *YOU* do to speed up the date of Victory?

4th Dec 2021 jlamprecht Comments Off on WHAT CAN I DO? – What can *YOU* do to speed up the date of Victory?

6th Jun 2021 jlamprecht Comments Off on COVID hit’s S.Africa with 72% decline in tourism!

Chart: Did Apartheid kill millions of blacks? Or did the Black population shoot through the roof?

S.Africa: No more room to store the garbage… South Africa has hit a rubbish day zero

19th Apr 2022 jlamprecht Comments Off on S.Africa: No more room to store the garbage… South Africa has hit a rubbish day zero