[Although these blacks are using violence it also shows you how incredibly over-sensitive they are over nonsense. Deep down blacks, and even black presidents are very sensitive to criticism and they even pass laws making it illegal to laugh at them. It shows you how vulnerable they really are. I don’t care about these big shops because they’re in with the Jews. But it shows you how these blacks continue endlessly to break things. The longer these blacks are “free” the angrier they are getting. This is because we whites have not hit back at them, so now they just run rampant with all kinds of new nonsense. These blacks would not have dared to do this 30 years ago under white rule because we would have put them in their place. I don’t see any future except for us to stand up to the blacks. Look at the silly “hoodie” that they rioted over. The truth is that here in Africa the blacks have been taught to find all sorts of silly excuses in order to be “angry” and to use violence against whites. At some point their violence must be met with the steel fist of the white male to teach them some deadly lessons. Jan]

I wonder why South Africa is such a s–thole?

People angered by a “racist” advert for H&M have ransacked some of the clothing chain’s stores in South Africa. Protesters from the left-wing Economic Freedom Fighters (EFF) group targeted six shops in Gauteng province, police said. Video posted on social media showed racks of clothes being pushed to the floor. In one location, rubber bullets were fired to disperse demonstrators. While officers are monitoring the situation, they said they had not made any arrests so far.

They chose to riot over this hoodie:

[UPDATE] Video of damage inside the H&M at Sandton City, EFF members are protesting there. Video from eNCA's Masechaba Mogane pic.twitter.com/bZb9RjJCEU

[UPDATE] Video of damage inside the H&M at Sandton City, EFF members are protesting there. Video from eNCA’s Masechaba Mogane

EFF’s Floyd Shivambu tweeted after the incident: “That @hm nonsense of a clothing store is now facing consequences for its racism. All rational people should agree that the store should not be allowed to continue operating in South Africa.” 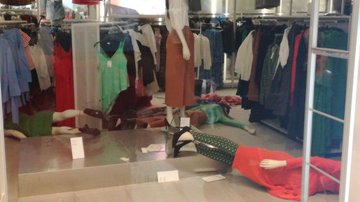 “[IMPORTANT NOTICE]: All the stores of that racist retailer @hmsouthafrica are CLOSED. Racism must fall and we will never tip toe around racists,” he wrote in another tweet.

The “Economic Freedom Fighters” are a Marxist-Leninist party in South Africa whose leaders have openly said they want to kill all white people.

They’re the third largest party in the country.

Their members were seen dancing in celebration over the destruction of the store:

You can read the rest of this article on Renegadetribune: http://www.renegadetribune.com/south-africa-rioters-trash-hm-stores-racist-hoodie/

5th May 2022 jlamprecht Comments Off on S.Africa: The Turf war over electricity distribution intensifies

How the ANC ruined South Africa!

13th Aug 2018 jlamprecht Comments Off on How the ANC ruined South Africa!

9th Dec 2021 jlamprecht Comments Off on Boere: Onthou dit altyd: Krag is beter as Swakheid Moed is beter as Lafheid

S.Africa: Afrikaans couple want to flee to the USA – Email to me

15th Aug 2019 jlamprecht Comments Off on S.Africa: Afrikaans couple want to flee to the USA – Email to me

DREADFUL: USA becoming like S.Africa: Jews told us this too: Minneapolis police tell residents to obey criminals and ‘be prepared’ to be robbed

4th Aug 2020 jlamprecht Comments Off on DREADFUL: USA becoming like S.Africa: Jews told us this too: Minneapolis police tell residents to obey criminals and ‘be prepared’ to be robbed

Very Important: NEW book about the Economics and Politics of a future Afrikaner Ethnostate

Does anyone know who this White Liberal South African woman is?

How did COVID affect Whites? -Fascinating statistics from South Africa

What is the proper definition of a FAILED STATE? Why this is good for Whites…

S.Africa: AfriForum sticks to its guns on Shoot the Boer being hate speech – My Comments

NATO summit to highlight growing influence of Russia, China in Africa Access to the comments – My Comments

We have become a society of cowards…

S.Africa: The Electric Rolling Blackouts are back with a vengeance…

From Rhodesia to Zimbabwe: Cathy Buckle, now famous – was AGAINST Ian Smith

A FAILED STATE is WONDERFUL: That’s our path to FREEDOM!

2007: Gustav Muller and the Suidlanders scaring White people: The Night of the Long Knives