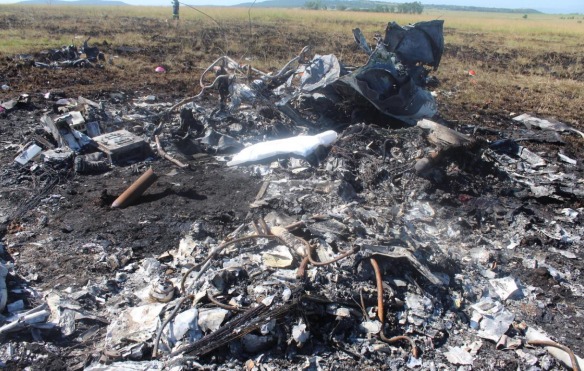 Investigators combed through the debris in the aftermath of the crash in Winterton, KwaZulu-Natal.
Image: SA Civil Aviation Authority

A preliminary investigation by the SA Civil Aviation Authority has confirmed the helicopter which crashed en route to KwaZulu-Natal last month killing Netcare 911 medics and its pilot broke apart in midair and the impact was “not survivable”.

The Bell 430 helicopter took off from Ultimate Heli heliport in Midrand, Gauteng, heading to Hillcrest Hospital in Pietermaritzburg on January 21. On board were a helicopter paramedic, two doctors and a theatre nurse and 12 bottles of oxygen.

“After approximately 1.5 hours in flight and cruising at 725ft [221m, above ground level], the helicopter started to spin uncontrollably, breaking up in flight while losing height rapidly. The helicopter impacted the ground and immediately post-impact fire erupted which destroyed the helicopter. All five occupants on board were fatally injured,” reads the report.

The wreckage was scattered in a 500m radius at the scene of the crash in Winterton.

The report said eyewitnesses travelling on the N3 Highway as well as a farmer reported that the helicopter “suddenly started to spin around while losing height rapidly. The witnesses then saw what looked like helicopter parts breaking off before it crashed and burst into flames.

“The witness (farmer) stated that he saw a red and white helicopter spinning around with objects being flung out of the helicopter. The helicopter maintained a south-easterly direction but started to lose height rapidly. The loss of control continued until the helicopter impacted the ground and burst into flames just after flying over the main road underpass which crosses the N3 Highway.”

The Bell 430 had been operating in Angola before being imported, in parts, and being reassembled in SA.

The preliminary report was compiled based on information gathered during the ongoing investigation and may change as new evidence is uncovered.

Two Faces of Jewish Politics in South Africa: DA and ActionSA set to kiss and make up over the future of Gauteng metros

13th Dec 2021 jlamprecht Comments Off on Two Faces of Jewish Politics in South Africa: DA and ActionSA set to kiss and make up over the future of Gauteng metros

Video & Audio: Big Pharmaceutical companies: How you can be sterilized without permission & more…

23rd Mar 2020 jlamprecht Comments Off on Video & Audio: Big Pharmaceutical companies: How you can be sterilized without permission & more…

24th Nov 2020 jlamprecht Comments Off on Funny & True: The Best Lawyer/Attorney joke ever…

Only in Africa: FAKE COVID Vaccines!!! – My Comments

18th Mar 2021 jlamprecht Comments Off on Only in Africa: FAKE COVID Vaccines!!! – My Comments

From Jan: Lots of Power Outages: Putting up Battery powered light bulbs in my house!

You can be fired for sending WhatsApp messages in South Africa

Could the Russians be friends of White South Africans? Could we abandon America? Would we get weapons from Russia?

Do White South Africans have any friends anywhere?