[Underneath all this (((Liberal))), (((Elite)), Jewish nonsense is something one cannot trust. All this “peace-keeping” that is going on worldwide is interference. It is interference in the affairs of other countries. Time and again the USA and UK have assisted communists. The USA is doing these exercises for a reason. The USA has military bases across the world and the USA is dominating everything and every place. This is the terribly bad result of WW2 being lost by our European brothers. Now the USA, sticks its nose into everyone’s business. Now if they were fighting communism or protecting the whites I’d be all for it.

So one part of the “peace keeping” is great because if the blacks were to attack us en masse the USA would come to keep the sides apart. That’s fine up to a point.

But what if we whites were determined to make our own stand? What if we decided to create our own nation and independent state using force? Then that same USA would come here to KILL US! That would not be allowed.

This current dysfunctional, multiracial, multicultural, black-dominated country is GOOD in the eyes of the USA/UK/Jews/Elite. And we whites are trapped inside this system. If we ever tried to break out of it by our own efforts … the USA and the other “white” nations would come here just like during the Anglo-Boer war and they would come here to kill us. So just remember that “peace keeping” is a double-edged sword and if we were winning against the blacks one day, then we would be the enemy and the USA would come to help them destroy us. Just remember that. Here’s a news report from 2017. Jan]

US Army in SA for peacekeeping exercise 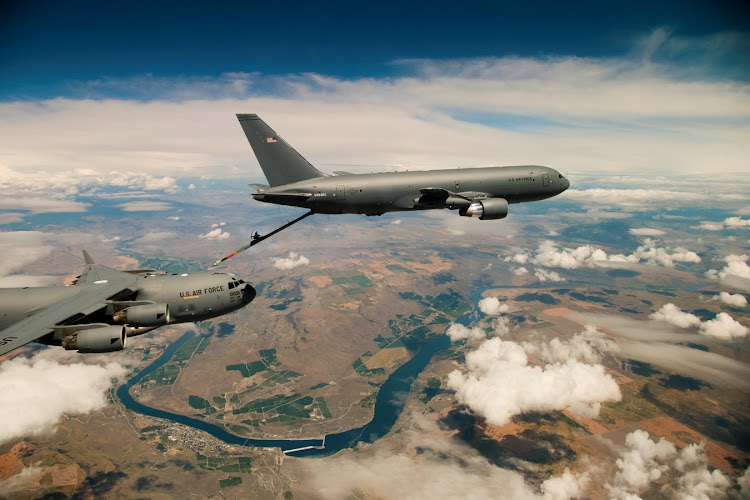 US troops have begun to arrive in South Africa for a joint exercise with local soldiers.

Two US Air Force C-17 Globemaster transport aircraft have landed at Upington Airport‚ bringing in equipment and personnel for Exercise Shared Accord‚ which begins on Monday at the South African Army Combat Training Centre in Lohatla‚ Northern Cape.

Troops involved in 18-day exercise — a company from the US Army’s 101st Airborne Division and a company from 2 SA Infantry Battalion — will conduct a peacekeeping operation under a UN “chapter 7” mandate‚ in which belligerent forces are forced to disengage from armed conflict.

“This mobilisation will be done from various and multiple locations in South Africa to the Northern Cape with the aim to strengthen a bilateral relationship between US and South African forces that allows mutual benefit to improve understanding of partnered operations with a highly capable allied force.”

US “sealift” capabilities will be tested by docking a vessel in Cape Town and moving its cargo in a road convoy to Lohatla‚ escorted by troops under the orders of the Western Cape joint tactical headquarters.

DefenceWeb reported that one of the drills during the exercise would involve soldiers encountering and defusing improvised explosive devices (IEDs). A company from 21 SA Infantry Battalion would make up the opposing force‚ it said.

Paxton said: “The exercise will also focus on inter-operability during military actions on various subjects. These will include shared interest in tactics‚ techniques and procedures‚ individual skills training‚ bush craft‚ counter-IED drills and night operations‚ as well as a UN peacekeeping scenario that incorporates elements of US/South Africa recent experience such as strong point defence‚ direct action and targeted offensive operations.”

1912s: Jews aiming to use Race War against Whites…

10th Feb 2020 jlamprecht Comments Off on 1912s: Jews aiming to use Race War against Whites…

Pic: How South Africans really feel about the Black Communist ANC government that rules us…

21st Feb 2022 jlamprecht Comments Off on Pic: How South Africans really feel about the Black Communist ANC government that rules us…

GoyimTV runs much better on Mobiles than Bitchute

The Boer General who fought the Jews & gave them hell

25th Jun 2021 jlamprecht Comments Off on How Communists really work in 2021: Similarities between the Communist Party of the USA & the South African Communist Party

2006: S.Africa: President Mbeki in March 2006: There is no Electricity Crisis

2008: S.Africa: President Mbeki side-steps his responsibility for our Electricity criss & wants YOU to pay more

2010: My First Trip to America: Comparing America to SA in various ways

2010: White Zimbabwean warns White South Africans: Black people want us OUT… I have no hope, we Whites are too stupid…

This is civil war: SA is now just DAYS away from a National Shutdown – My Comments

WTF? What is the Mandela Effect? – Having a FALSE MEMORY? – My Comments

Video: The 1st Anglo-Boer War: The Battle of Bronkhorstspruit and the reasons for war