[Eskom is the idiotic electricity supplier. They have more money than brains. Jan] 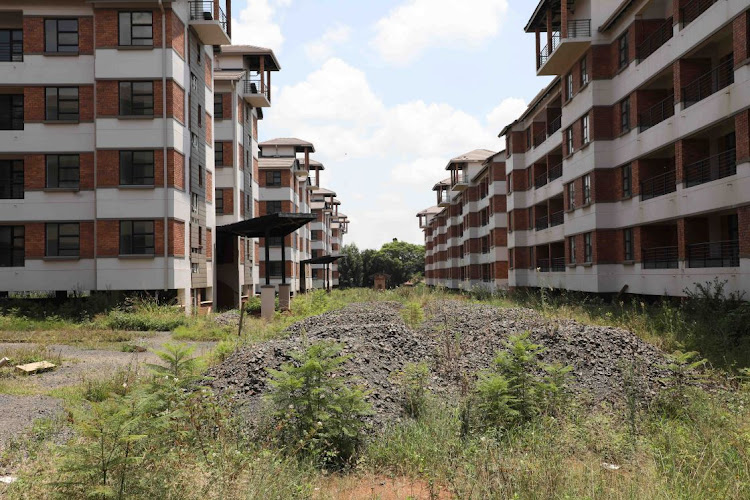 The abandoned Kusile housing project, which has cost Eskom R840m. The department of human settlements says it is currently undertaking a process of evaluation of the property.

The national department of human settlements confirmed on Friday that Eskom had approached it with a list of properties for possible purchase — including the controversial Wilge flats near the Kusile power station in Mpumalanga.

The flats were built — at enormous cost — to house technicians working at the power station but were never completed.

Eskom budgeted R160m for the project in 2012, but parliament heard on Wednesday that R840m was spent, the project remains incomplete and the units were uninhabitable.

Eskom said on Thursday the flats were now the subject of a disposal process in which negotiations with a potential buyer, the human settlements department, were at an advanced stage.

The rationale for building them was to house construction expatriate workers who would be needed to work at the Kusile power station project.

Eskom spent R840m on flats for staff, but no-one can live in them
An official from the auditor-general’s office says it was ‘actually very difficult to get credible answers’ to how the costs went from R160m to R840m.

Eskom decided to stop funding the project in 2018 and all construction work ceased.

“Eskom is in the process of disposing of the property, in line with government processes of public property disposals.

“This was always the intended course of action once construction at the Kusile power station was complete, as Eskom would therefore have no need for the property,” said spokesperson Sikonathi Mantshantsha.

Human settlements, water and sanitation ministry spokesperson McIntosh Polela said the department was doing an evaluation of the property.

“A decision will be taken on completion of the evaluation, as well as several other processes.” he said.

9th Nov 2021 jlamprecht Comments Off on S.African Govt is trying to loot Government Pension fund to save Electricity giant Eskom

Excellent, Excellent, Fantastic: No White could have said it better… I never cared, BUT…

16th Apr 2021 jlamprecht Comments Off on Excellent, Excellent, Fantastic: No White could have said it better… I never cared, BUT…

Video: WW1 to WW2: When the Germans had nothing …

11th Feb 2020 jlamprecht Comments Off on Video: WW1 to WW2: When the Germans had nothing …

South Africa: We warned government about total railway collapse 20 years ago — but they did nothing

16th Dec 2021 jlamprecht Comments Off on South Africa: We warned government about total railway collapse 20 years ago — but they did nothing

Photo: How good are those useless Jews with their science & engineering? – The Israeli Lavi Jet & Apartheid South Africa

22nd Oct 2021 jlamprecht Comments Off on Photo: How good are those useless Jews with their science & engineering? – The Israeli Lavi Jet & Apartheid South Africa

Africa: Russian Mercenaries: Wagner’s dubious operatics in CAR and beyond

S.Africa: Who ruined South Africa’s electricity supply, which was once the best in the world?

The Super Rich Jew Oppenheimers owners of the Mines that belonged to the Boers!

The Communist Terrorist: Nelson Mandela, proxy warrior for the USSR – Created by JEWS

S.Africa: Black Govt Censorship: scientists have been instructed to say nothing about Russia’s invasion of Ukr aine